In 1898 a memorial was erected on the bridge opposite West Street in commemoration of Queen Victoria's Diamond Jubilee. This was knocked down and carted away on a lorry, apparently without question, when the road through the village was widened in the late 1970's. After much persuasion, a replacement memorial stone was erected on the approximate site in 2003. 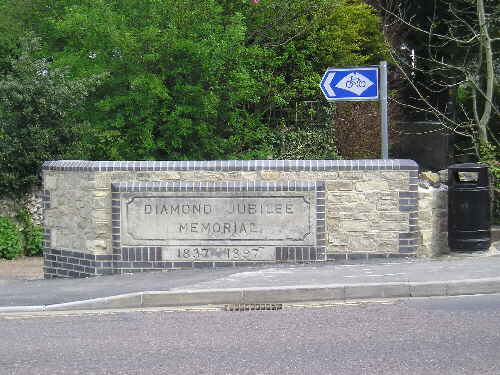 An account of the erection of the original memorial was printed in the IW County Press of 30 Apr 1898, page 7, and is retyped here in full.

THE JUBILEE MEMORIAL - The ceremony of laying the tablet stone of the Wroxall Jubilee memorial, which is in the form of a drinking fountain, clock, pedestal, and lamp column combined, and is being erected over the bridge in the centre of the village, took place on Wednesday afternoon in the presence of a large and interested gathering of parishioners and friends. Mr J Wallis, the contractor, and Mr J J Francis, hon. secretary of the committee, had arranged things very nicely. A carpeted platform was erected in front of the memorial, which was decorated with portraits of the Queen and other Jubilee devices, while overhead and across the street stretched bright coloured flags, a large Union Jack and the star-spangled banner, one on either side the memorial, being very conspicuous and suggestive at the present moment. The ceremony of laying the stone was skilfully performed by Mrs Wight, wife of the Rev. A Wight, the latter being also present. Among the company were Mrs Phillips, Mr and Mrs Sc?bley, Mr and Mrs Girdlestone, Mr Radcliffe, Miss Reed, Miss Morphew, Mr, Mrs and Miss Mullett, Mr, Mrs and the Misses Flux, Mr and Mrs Degville, and Messrs J J Francis, A Bull, C G Allen, J Wallis, W Wright, J Newnham, and C Pittis, CC. Mr W Flux opened the proceedings in a few well-chosen sentences, in which he explained that the memorial was being erected in accordance with a very strong wish expressed by subscribers to the Jubilee celebrations that there should be a permanent memorial. The contract amounted to Ł46, towards which the committee had about Ł30, leaving Ł16 to be provided, and the speaker gave a general invitation to present and absent friends to subscribe to making up this balance. Mrs Wight and other ladies then ascended the platform. The stone, bearing the inscription "Diamond Jubilee memorial," was held aloft by means of a block and chain, and after Mrs Wight had dexterouly[sic] laid the mortar beneath, it was promptly lowered by the contractor and his men, and the ceremony was over. After the applause had subsided, Mrs Wight was presented with a bouquet of flowers and a hearty vote of thanks was accorded her and the ladies who had assisted in collecting funds for the Jubilee celebrations, on the motion of Mr Flux, seconded by Mr Girdlestone. A verse of the National Anthem, sung by all present, brought the proceedings to a fitting close.

Also on the same page was an account of a concert held to raise funds for the memorial.

JUBILEE MEMORIAL CONCERT - A very successful concert was given at the Board Schools, Wroxall, on Wednesday evening, on behalf of the Jubilee memorial funds. There was a large and appreciative audience. The Shanklin Mandoline Orchestra opened the programme with a well-played overture, "Sicily polka" (Ellis), and during the evening contributed other items in capital style, the audience showing their approval by warm plaudits. Mrs Reilly Mead sang "Kathleen Mavourneen" (Crouch) and "The toilers" (Piccolimini) in a most charming style, and responded to enthusiastic encores by singing "Going to Kildare" and "Killarney." Madame Kate Munns was equally successful in her interpretation of "The forge and the bell" (Stephen Adams), "When my Jim comes home" (Marzials), and a third song, and responding to determined recalls gave "My own good man" and "Husbands." These talented vocalists also gave the duet "Excelsior" (Balfe), which was likewise encored. Miss Dora Munns gave a very pretty interpretation of the song "Bye-bye," and was deservedly recalled. Mr J J Francis, secretary of the Jubilee Committee and organiser of the concert, sang with characteristic ability the songs, "Their heads nestled closer together" and "I've got the ooperzootic," the humorous song, as usual, being vociferously encored. From start to finish the concert went smoothly and well and was greatly appreciated by all present. At the close Mrs Reilly Mead and Madame Kate Munns were eacch[sic] presented with a bouquet, and on motion of Mr Flux (chairman of the committee) a hearty vote of thanks was accorded them and the members of the orchestra for their valued services. Mr K? Marshall acknowledged the compliment on behalf of the orchestra and the ladies. We are glad to learn that financially the effort was also a success.