The original Wroxall mixed junior and infants school was located at the junction of Appuldurcombe Road and St John's Road. It was built in 1873 at a cost of Ł1,400 and had places for 250 children to cater for the village's expanding population. The building included a residence for the schhol master. Before Wroxall became a parish in 1907, the school was managed by the Newchurch School Board. Average attendance at the turn of the century was around 130 juniors and 70 infants.

In 1881 the school headmaster was John R BULLEY (how very apt!), a teacher from Exeter, and he was assisted by his wife Jane and 18 year old son John. A younger son William BULLEY also acted as a monitor. In 1898 the headmaster was John James FRANCIS, and the infants' mistress Miss Fanny E MORRIS (see photo below).

A new school was built nearer the centre of the village and opened in 1986 and the old school was demolished the following year. A small number of houses have now been built on the site of the old school and aptly named Old School Court. 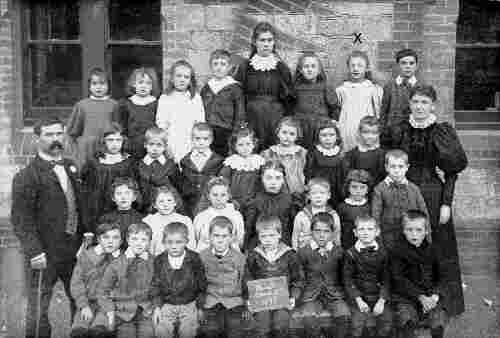 Group 5 in 1897 at Wroxall School
Click on photo for enlargement (46kb)
My grandmother, Jeannie Madeline CARLEY (b1888), back row right.
The teachers are believed to be John James FRANCIS, master; and Miss Fanny E MORRIS, infants' mistress.
Do you recognise anyone else? 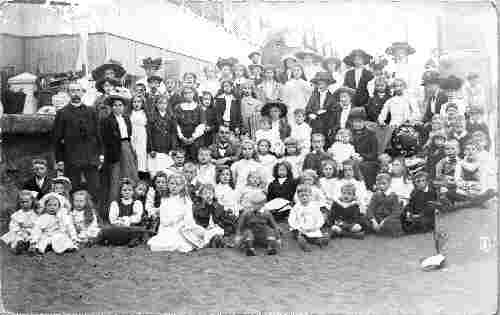 The vicar is believed to be the Rev R J LUBBOCK, vicar of St John's Church 1910 to 1919 which helps to date this photo. I don't recognise the location, but it could be Sandown Esplanade as the photo was taken by a Sandown photographer (L E A Brument). Some of my relatives are present. Do you recognise any of yours?