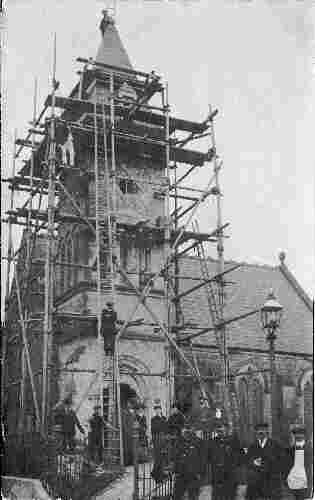 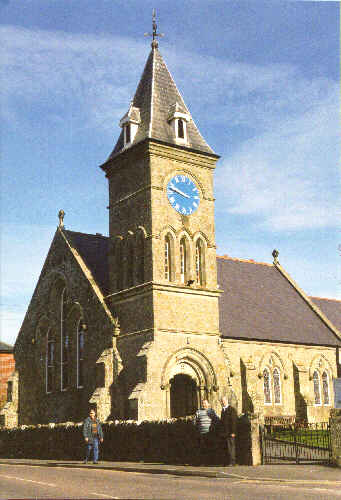 When the church was built in 1875 it did not have a tower. The present day tower was added by public subscription in 1911 to receive the clock presented by Henry Charles MILLETT, RN, a Crimean Veteran and former churchwarden. 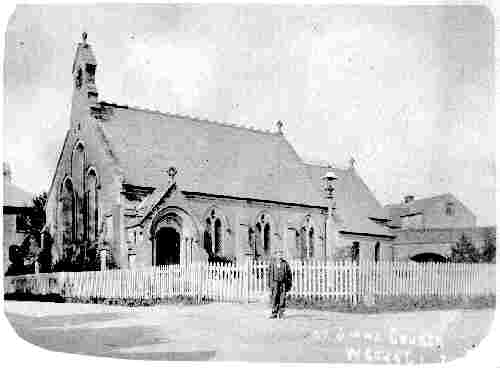 The expanding population of Wroxall brought about by the building of the railway in the 1860's demanded a local place of spiritual enlightenment. Although there was a commodious Bible Christian Chapel in the village, there was no facility for Anglican worship. Indeed, the nearest such church was at Newchurch, some 5 miles north, to which villagers had to travel for worship, baptisms, weddings and funerals - the poorer ones on foot.

Thus, a fund was started in 1873 to provide for a local church. The church was built in 1875 and its consecration service was performed by the Archdeacon of Winchester on 21 December 1877. By 1878 the fund had reached Ł1,410, mainly by contributions from individuals, which covered the cost of the building and provision of some furniture.

The original church of St John's was a small cruciform edifice of stone, built in the early English style to a design by T R Saunders of Ventnor. (He also designed the Primitive Methodist Chapel which was built nearby about the same time). The church consisted of a chancel, nave, organ chamber, south porch and a small western belfry housing one bell, and provided seating for 130.

The considerable surplus of stone, excavated during the construction of the nearby Ventnor railway tunnel, provided a ready source of building material. While this kept the cost down, it has since proved to be of poor quality and the building is in constant need of refacing.

The present day tower was added by public subscription in 1911 to receive the clock presented by Henry Charles Millett, RN, a Crimean Veteran and former churchwarden from 1897 to 1905, who had died in 1909. The clock was made by Chancellor & Son, Dublin in 1887 and, it is reputed, was salvaged from a department store on the mainland. The task of winding and maintaining the clock was undertaken by several generations of the Linington family. The clock mechanism was removed and fully overhauled in 1998. (Its maintenance is now in the hands of the very capable AA breakdown man who lives in the village!). 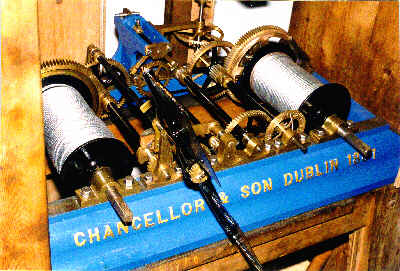 The belfry contains a carillon of eight bells which are called 'The Silver Jubilee Bells' since the last three bells were added by public subscription as a memorial to King George V and Queen Mary's silver jubilee in 1935. The earlier bells were presented by individuals as follows:- 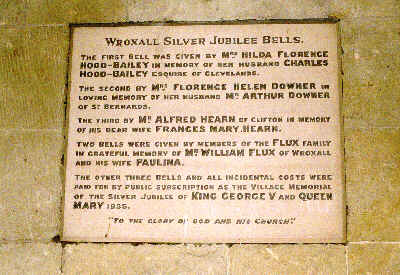 Commemorative plaque for the bells, located in the south porch

Initially, the interior of the church was very plain, but the addition of some oak paneling and stained glass windows in later years brightened it up. The redros above the alter are in three panels of dark wood painted with a scene on Calvary. It is dedicated to Alfred Wight, a Priest who voluntarily gave his services to the Parish from 1890 to 1898. The alter is surmounted by a triple stained glass window depicting the Ascention. This was given by the family of Edward Winslave, for some years a sidesman of the church. Five other stained glass windows commemorate a curate-in-charge and other benefactors. A Baptistry was included at the western end. Behind the lectern is an oil painting of the Virgin and Child given by the 'Children to their Church, Christmas 1941'.

During WW2, the Church was shaken badly by bombs dropped nearby. The main damage was distortion of the large west window which, still, cannot be made completely weatherproof. A war memorial, consisting of a tall cross on a plinth of steps, was erected outside the porch in 1920 and records the names of those from the village who died in both World Wars. 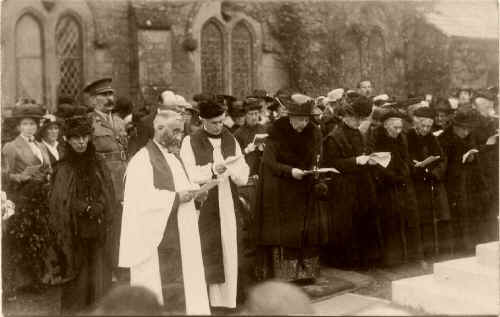 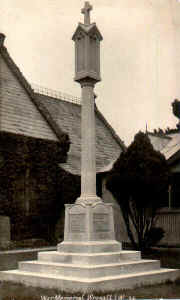 A hall was built adjacent to the church in 1903 as a venue for church meetings and other community functions such as wedding receptions, baptism parties and a thriving whist drive. Fifty years later, to mark the coronation of Queen Elizabeth II, a new kitchen and toilets were added. However, with the building of a more substantial community centre nearby in the early 1980's, the original church hall provides for smaller events only these days. 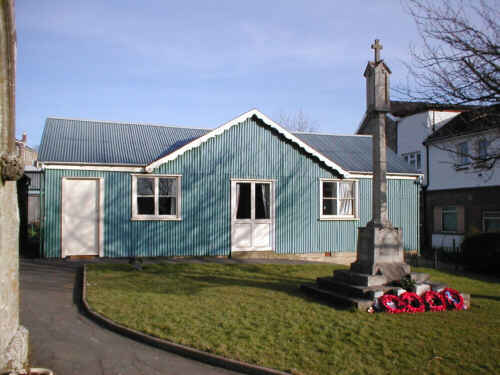 St John's was originally termed a 'Chapel of Ease' within the Parish of Newchurch which, then, was in the diocese of Winchester. The vicar of Newchurch, a curate and two or three trustees provided administration and ministry of St John's. A succession of devoted priests was appointed by the Bishop to act as assistant stipendiary curates until Wroxall became a parish in its own right in 1907. St John's first vicar in 1907 was the Rev R J Roberts who had already served as curate-in-charge for some years. He was followed in 1910 by the Rev R J Lubbock. Although not obligatory, a Parochial Church Council was appointed in 1911. The parish of Wroxall was included in the diocese of Portsmouth on its foundation in 1927.

St John's did not have a churchyard and, for several years, burials continued to be made at Newchurch, Godshill, Shanklin or Ventnor. However, a cemetery was eventually established nearby, for which the burial register contains records dating from 1910. It is worth noting that burials at Wroxall after 1934 are included in the Ventnor register. 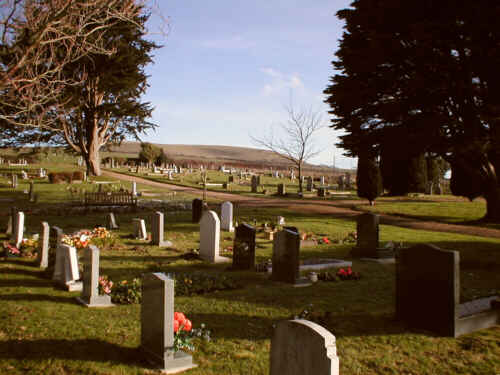 Neither did St John's have a permanent vicarage until the 1950's, and this presented the succession of encumbents with continual difficulties in serving the parishioners from their various abodes about the village. The most convenient appears to have been Oakhill, a large house just opposite the church, which was used as a vicarage in the 1930's, but the details of this tenure are unknown. Indeed, this house later served as a private Country Club before being bought by a brewery and turned into the aptly named Worsley public house. The problem of not having a permanent vicarage was solved in 1956 when the organist Grace Waterton (nee Hearn) magnanimously bequeathed her large house (Clifton in Clarence Road) to the Diocese. However, Clifton was never used as a vicarage, but proceeds from its sale were used to fund a more suitable premises.

Although the railway through Wroxall has long since gone (last train to Ventnor was in 1966), the Church of St John still serves the ever-growing community. Indeed, the Sunday services are well supported and, of course, there are the regular baptisms, weddings and funerals to cater for.

CHURCH PARADE - On Sunday the Ventnor detachment Isle of Wight Rifle Volunteers had a church parade. The main body assembled at the Ventnor Railway-station and proceeded by the 10:15am train to Wroxall, where they were joined by the local section. Altogether there were nearly 100 Volunteers on parade. Headed by the band, playing appropriate music, the detachment marched from the square to St John's Church, where the Rev G F E LOWE conducted a bright and cheerful service. In addition to the organ, the band also played the hymn accompaniments, and this Sunday being reserved for the annual harvest festival, the interior of the church was effectively decorated with flowers, corn, and fruit. The service opened with the processional hymn "Onward Christian soldiers," Mr J SHARPE read the lessons, and the anthem "He watereth the hills," was sung by the choir. The Rev G F E LOWE base his sermon on the words of Isiah, 1xv 25, "The wolf and the lamb shall feed together," and during his discourse touched on the subject of the South African war and the necessity of always being ready at the call of duty. Other hymns were "Come, ye thankful people, come," and "O Lord of Heaven, and earth, and sea." After the service the National anthem was sung, and the Volunteers fell outside the church. The main body then marched back to Ventnor, the band leading as before. The officers on parade were Capt W B JUDD (commanding), Lieut LLEWELYN, and Surgeon-Capt BLAKE. QMS H LININGTON was also present. There was again a good congregation in the evening, Mr LOWE conducting. The offertories during the day were for the IW infirmary. The decorations were carried out by a band of ladies, including Miss MORPHEW, Miss MOORE. Miss MONKTON, Mrs George MOSES. Mr and Mrs THOMPSON, Mrs MILLETT, and Mrs HAWKINS and Master WIGHT. Mrs H LININGTON sent flowers.
- IW County Press, 4 October 1902

CHOIR OUTING - "A delightful excursion was made to Brighton on Coronation-day by the choir of the church, accomapnied by the two churchwardens (Messrs H LININGTON and P MILLETT), the reader (Mr SHARPE), organist (Mr E G MEDLEY), school superintendent (Mr J A CLARKE), and a few others, the party numbering 31. After a depressing, foggy morning, the weather cleared by the time Brighton was reached, at 10:30, and at noon the sun shone brilliantly, and ideal summer weather was enjoyed for the remainder of the time at London by the Sea, which place was not left until 7:45. Dinner and tea were provided in good style at the Grand Concert-hall, Mr SHARPE genially presiding. After tea the organist, in appropriate terms, proposed a hearty vote of thanks to the kind donors of an outing which had proved enjoyable and successful in every way. This was seconded by Mr W A WRIGHT and carried by acclamation. Mr LININGTON suitably replied, testifying to the enjoyment which had been participated in by all. On the call of Mr MILLETT, thanks were accorded to the host for his efficient catering. Many of the sights of Brighton were visited, and after a tiring but very happy day home was reached shortly before 11 o'clock ."
-  IW County Press, 6 June 1906 (page 8)

My thanks to Ann Barrett for locating these articles.